September 7, 2019 By Jennifer Deems Comments are Off

Congratulations to Coach Ricardo Luis and LMVSC Patriots 2007 Boys Red on being selected as our Travel Team of the Week!  💥

The highlight of the past weekend was in their second match on Saturday against Towson, being tied 0-0, even th 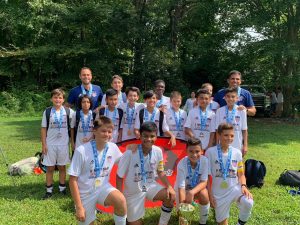 ough they held over 70% possession (mostly in their opponents’ half, with less than three minutes to go, our boys managed to score the game winner to earn the crucial three points they needed to get into the finals.  The game winner was a huge sigh of relief for everyone, and a big celebration ensued for the entire group of families and players watching on the sidelines.

According to Coach Ricardo Luis,”[The goal] took so long, and we had been building up the pressure against our opponents that the winner was well earned, and felt great.  All weekend long, the boys kept working hard and never quit until the final whistle.”

Although everyone put in a tremendous effort, we would like to highlight the backline (4 defenders): Christian Bonilla, Marko Sivic, Sean

We would also like to highlight the players that shown significant improvement throughout the week of training and four matches over the weekend:  Tony Alvarez and Sean Watson.

As we all know, there is always room for improvement.  Coach Ricardo observed the need to improve finishing and increasing speed of play.

Keep up the good work boys!