Game time limit and Duration:
Each game will consist of four, 10-minute quarters.  The clock will only stop on foul shots and time outs, except for the last three minutes of the game, when the clock additionally stops on all out of bounds situations.  Time limit between scheduled games shall be at least five minutes.  There will be a 3 minute break between quarters and a 5 minute break between halves.

Three-points will be awarded for shots made from behind the 3-point line for  games being played in gyms with a 3-point line.  For the 2021-22 season, the gyms with 3-point lines are Franconia ES, Mark Twain Gym 2 and Edison Gyms 1 and 2.

Either zone or man-to-man defense is permitted at any time.

Double-Teaming is not permitted in the 1st-6th Grade Divisions.  Nor is it permitted if a team is up by 15 or more.

Illegal double-teaming occurs when two players defend one person at any time except for when offensive player is within the area of the key and the foul shooting circle (extending to the area commonly known as the top of the key).  See photo below.

The first occurrence of this violation will be a warning, the second a technical foul (not recorded as a personal foul against either player).  Note that the High School and 7th-8th grade divisions do permit double-teaming except when a team is leading by 15 or more. 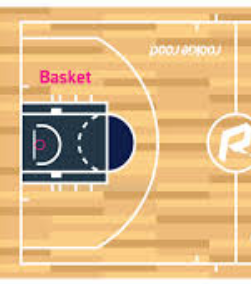 During this time, the double-teaming rule still applies for the B, C and D divisions.  Additionally, a team may not press at any time with a lead of 15 points or more.

During the regular season, there is no overtime.  Games can end in a tie at the end of the fourth quarter.

In the event of a tie during a tournament game, (not during seasonal play), a tie game shall be continued in overtime for 3-minute periods with one additional time out per team per overtime period (unused timeouts do not carry over one O.T. period to the next).  If a third overtime is required, the game will end by either team scoring one point (sudden death).  During each overtime period, coaches may select any of their players to participate and no substitution is required.

The High School Division consists of up to 10 players in 9th through 12th grades.

The “A” Division consists of up to 10 players in the 7th and 8th grades.

The D Division consists of up to 8 players in the 1st and 2nd grades.  When necessary, teams may exceed eight players.  The teams are co-ed and are further broken down to consist only of 1st graders or 2nd graders.

The “E” Division consists of players, who are 5 years of age as of December 1st – This is a developmental program for players 5 years of age.  The program introduces 5 year olds to basketball related fundamental skills while taking into account specific age relevant motor skill development in a non-competitive environment.

Coaches may reduce or eliminate playing time for disciplinary reasons including chronic missing of practice, but only with the prior notification and concurrence of the commissioner.  Teams violating the participation rule may be required to forfeit the game in which the violation occurred, and the coach may be subject to warning or possible suspension.

A.  DEFINITION:  For the purposes of this rule, a blow-out situation shall be deemed to exist in an LMVSC Recreational League game at any time and under any circumstances when the point-differential between the two teams then playing reaches twenty (20) points.

B.  REQUIRED ACTION:  At any time that a blow-out situation begins to develop, a point differential of approximately 15 points, in an LMVSC Recreational League game, the coach of the dominating team shall actively endeavor to preclude increasing the goal differential.  LMVSC recognizes that a coach cannot definitively control all of the dynamics of play in any given game, but the coach of the dominating team shall attempt to institute play with will result in a reduction in the rate of scoring such as requiring his/her players to pass the ball four or five times prior to shooting.

If the point differential increases to twenty (20) points, both the two following rules will be implemented by the coach of the dominating team:

(1)  When on defense, the dominating team cannot defend further from the end line than the foul line and its extensions to the sidelines, and

If the weaker team scores and reduces the point-differential to fourteen (14) points, the two rules will not be enforced until such time as the differential increases to twenty (20) points.

First violations of this rule shall be reported to the Player Director, as may be appropriate.  If the Player Director believes that a violation occurred and that sanctions are warranted, he or she shall report the situation to the Director of Basketball.  The Director of Basketball will consult with the Club Executive Director and shall decide if a suspension is warranted.  Suspensions shall be for one (1) game and shall apply to the dominating team’s next game, regardless of whether that game is a regularly scheduled or post-season tournament game.  Suspensions incurred as a result of the last game of a season shall be served at the first game of the next season if the coach of the dominating team is coaching at the next season.  A suspended coach shall not serve as an assistant coach while suspended.

Second or subsequent violations of this rule shall be referred to the LMVSC Rules and Discipline Committee and if a violation is found to have occurred, the R&D Committee shall impose such sanction as it deems appropriate.

E.  HEARINGS:   Nothing in this Rule shall be interpreted to mean that a coach alleged to have violated this Rule shall be entitled to a hearing in person.  The Player Director, Director of Basketball and Club Executive Director acting on a first violation, the R&D Committee acting on a second or subsequent violation, the Club Commissioner acting on an appeal of a first violation, or the LMVSC Executive Board acting on an appeal of a second or subsequent violation shall conduct such inquiry, by such means, as he, she, or they deem to be appropriate to the circumstances, including, but not limited to, inquiries by email, by telephone, by written reports, or by in-person hearings.

When the 20-point differential is reached, the referee will initiate a non-chargeable 30-second timeout so that the dominating team’s coach can brief his or her players on the proper way to play during this “Blow-out Period of Time.”  The play will be restarted with a throw-in on the baseline where the last basket was scored. During this non-chargeable timeout, the clock will be stopped.  There will be no stoppage in play for subsequent occurrence of a 20-point differential in the same game.  This is the case where the margin varies between 20 and 12 points, should that occur.

The following instructions apply to scorekeepers.  Familiarity with the scorebook is important to properly fulfilling the requirements of this task.  Many scorebooks have instructions in the book on how to keep track of the statistics of the game.  The Scorekeeper needs to allow him/herself time to review these procedures prior to the start of the game.

Each game will consist of four, 10-minute quarters.  The clock will stop only on foul shots and time outs, except for the last three minutes of the game, when the clock additionally stops at every whistle.  There will be a 3-minute break between quarters and a 5-minute break between halves.  Time limit between scheduled games shall be at least five minutes.

In the event of a tie during a tournament game, a tie game shall be continued in overtime for 3-minute periods with one additional time out per team per overtime period (unused time outs do not carry over one O.T. period to the next).  If a third overtime is required, the game will end by either team scoring one point (sudden death).  There is no overtime during regular season play.

B.   WHEN TO START CLOCK

(1)  If a team knows in advance of the game that it will be short players, the Coach should contact the Player Director or Director of Basketball to obtain the necessary players to get to five players for the game.

(2)  If arrangements are being made in advance:

(4)  No guest players are permitted during the end-of-season tournament.

(5)  A report shall be made to the Director of Basketball in all cases of when a guest player is used.  Information included in that report are as follows: