September 17, 2019 By Jennifer Deems Comments are Off 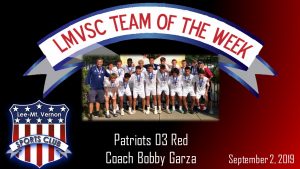 According to Coach Bobby Garza, “The results from the past weekend is
a true testament to the depth of our team in keeping the intensity
high, even when changes were made to the tactical operation of the
game. I think this quote from Ghandi best sums up our performance this
past weekend,’Satisfaction lies in the effort, not the attainment.'”

The top playmakers from the weekend were Matthew Krill and Carson Kourtesies.

Top Scorers were Andrew Medrano and Keegan Peralta with three goals
apiece, as well as Michael Osafo and Viktor Petrusevski with a pair
each.

Hardest working players were Andy Medrano, Carson Kourtesis and Henry
Lainez-Rodriguez.  Medrano hustled to put himself in positions to
score three goals.  Kourtesis was great in keeping defensive shape
when under pressure.  Lainez-Rodriguez kept the intensity level in the
middle of the park even when changes were being made.

Most improved player from the weekend is Matthew Krill, in how well he
played center defensive midfield.  Coach Bobby: “He really locked down
the middle in pinging the ball around and orchestrating our attack.”

In terms of areas to improve, Coach Bobby states,”We still need to
work on keeping possession of the ball when under pressure, as well as
transitioning as one unit.”

Keep up the great work boys!