October 24, 2019 By Jennifer Deems Comments are Off 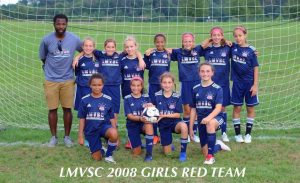 at Lee District Park, Coach Fabien and the 2008 Girls played a great game, winning the match 4-1.

The game began as a very tight contest, with neither team looking dominant. Coach Fabien then begin to analyze the strengths and weaknesses of the opponent and moved some players around the field.  In the last 15 minutes of the first half, the girls began to develop a nice rhythm to their play and controlling the tempo of the game.

2008 Girls Red scored the first goal of the match after a flash of individual brilliance by Kennedy Leary. With a fantastic combination of technical skill, tactical acumen, and strong determination, Kennedy deftly evaded not one, not two, but three Bethesda defenders, before finding herself one-on-one with the goalkeeper whereby she calmly, and clinically, slotted the ball past the Bethesda goalkeeper and into the back of the net.

A few minutes later, Kennedy Leary was able to get on the end of a great cross by Elizabeth Lord to burst the net for the second time against Bethesda to make the score 2-0 at halftime.

The second half saw the continued dominance of the 2008 Girls Red, with another pair of goals.  With the score 4-0, Bethesda was able to pull one goal back late in the game but was not enough to rally back.

According to Coach Fabien,” it was a complete team effort and fun to see our girls use their creativity, problem-solve, and find solutions collectively.  It was also very satisfying to see the girls implement the technical aspects and tactical concepts that we have been working on during training.”