November 15, 2019 By Jennifer Deems Comments are Off

LMVSC Patriots 2009 Girls Red were crowned champions of the Columbia Fall Classic this past weekend. 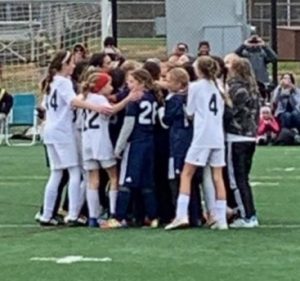 According to Coach Fabien Lewis, “The girls showed great fighting spirit throughout the weekend and were able to find a way to overcome the difficult moments in each game. They are really starting to come together as a team.”

In their first match against Severna Park, 2009 Girls Red were able to put on full display the training concepts that they had been working on this past season.  Right from the start of the game, they were able to dominate possession, use the width of the field, and change the point-of-attack, in order to find open space on the weak side.  They had their opponents chasing the ball all over the park and created chance after chance thru clever combination play with Kailyn Albright Merkel and Karoline Folk, as well as great individual dribbling on the flanks by Isabelle Whalen and Ma

ddie Howard.  They were able to convert one of their many chances with a goal by Karoline Folk late in the first half, and their first match ended with a 1-nil victory.

In their second match, they faced a fierce opponent in what was an epic encounter.  Pipeline managed to go three goals ahead by the early second half and appeared to be a team above and beyond the current level of our LMVSC Patriots 2009 Girls Red.

Then midway thru the second half, Zoe Tickner dribbled the ball past the last defender, and struck a well-placed shot past the Pipeline goalkeeper

just inside the far post to make the score 3-1. This was the decisive moment that changed the momentum of the game.  Minutes later, with Pipeline struggling to clear the ball from their area, Zoe Tickner managed to win the ball and struck it powerfully into the lower left-hand side of the goal.

With only seconds left of the game, and the score 3-2 in favor of Pipeline, Karoline Folk streaked down the left flank, and crossed the ball towards the mouth of the goal, where several teammates were waiting to pounce.  In a mad and desperate scramble for both teams, Zoe Tickner was able to recover the ball, beat her mark on a quick dribble, and smash the ball thunderously over the Pipeline goalkeeper’s hands, and into the roof of the net to draw the game 3-3, amidst the clamorous, frost-bitten cheers of the euphoric spectators.

In their third match versus Mclean, they were able to score the first goal to take the one-nil lead.  Mclean then tied it up at 1-1.  At this point the match proved to be a very even one, with slight differences amongst the two teams. One of those differences however was Delaney Paul.  Delaney was instrumental in leading the defensive efforts of the team and keeping the opponents at bay.  This allowed other players like Maddie Howard and Isabelle Whalen to attack relentlessly and force their opponents into making an error deep into their own half.

Patriots score to go ahead 2-1.  Then Mclean ties it again 2-2. Eventually, with less than ten minutes to play, their pressure and solid, well-coordinated team defense would pay off.  Isabelle Whalen crossed the ball into the box.  Maddie Howard fights to get onto the end.  McLean struggles to clear.  Zoe Tickner gets in the mix and uses her power and tenacity to win the ball and drive it into the back of the net, providing the 2-1 game winner.

In the championship match, they faced the rematch against the same Pipeline team they struggled to tie in the second game.  Pipeline again looked dominant in the early stages, taking a 2-nil lead deep into the second half.  With just under 15 minutes of the match, Pipeline concedes a penalty.  Zoe Tickner converts the penalty kick and provides yet another catalyst for her team’s comeback.  With less than three minutes remaining, Patriots score the equalizer.

This sends the Finals into penalty kicks in order to decide the winner.

The next round, Patriots miss.  Then Pipeline misses on save by Yoleitni Mariscal. 1-0 Pipeline.